One of Shildon’s most important and symbolic industrial cultural objects returned to display for the first time in decades on Saturday 5th February 2022, and the Shildon Heritage Alliance CIC played a central role its return. The group paid, through its local fundraising, for the materials used in the construction of a new purpose built case, which was designed and built by Shildon Railway Institute Committee member Selwyn Jenkin. The group also played a key role, through its network of contacts, in facilitating the agreement between its custodians, the Auckland Railways Group, and the Railway Institute Committee. Then the SHA CIC organised a grand unveiling event which featured songs of Shildon written in the community and also brought the current serving General Secretary, Michael Lynch, to Shildon to speak and unveil the repaired banner. Other guest speakers key at the event included Gerald Slack of the Auckland Railways Group who spoke of his group’s endeavours to have the banner repaired, and the suitability of the Institute as the best location for its display, and Shaun Thompson, current Secretary of the Railway Institute, who as part of his speech, presented Mr Lynch of the RMT with a lifetime membership of the Institute. 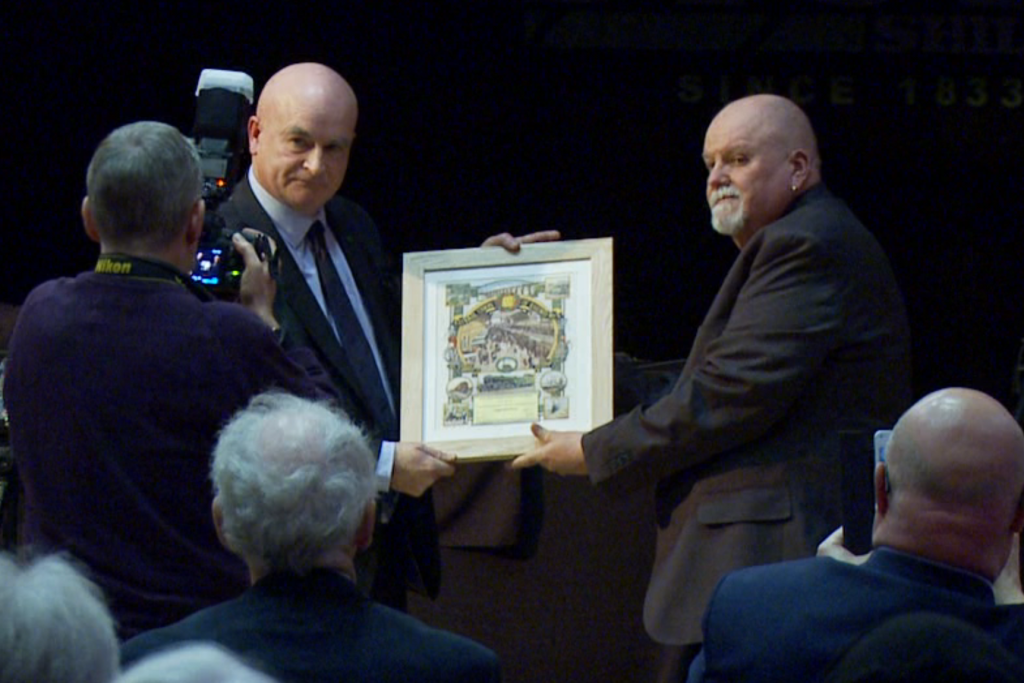 Mr Shaun Thompson, Secretary of Shildon Railway Institute receives the gift of an NUR Centenary Certificate commemorating Shildon Works No.2 Branch to be displayed at the Institute.

The silk banner revealed on the day, was manufactured in 1919 for the National Union of Railwaymen Shildon Works No. 2 Branch, which depicts Shildon Works at its peak. It had been put in storage decades ago due to its fabric having become very fragile. The patient endeavours of local rail historian Mr Slack, and his group, have led to the banner being carefully repaired by a leading restorer.

Speaking of his motivation for repairing it, Gerald said “When we were granted custodianship of it in 2016, by the National Railway Museum, we were saddened by its poor condition as a consequence of unfavourable storage and the ravages of time and acutely aware of the imperative to restore it to save it for posterity and displayed in the town. There was also a personal interest in restoring and displaying the banner as both my grandfather and great grandfather worked at Shildon Works, as did many members of my wife’s family.”

It is thought to be one of the earliest NUR banners still in existence, having been commissioned only six years after the Union’s founding. Given the delicate nature of its silk damask fabric its 103 year survival to date is in itself an achievement. It was made by George Tutill and Co., a London company founded in 1837 and the best known banner makers in Britain at the time. They were tremendously expensive, so seen as symbolic of the power and success of each union branch.

On its new home, Gerald told us, “Shildon Railway Institute is absolutely the right place to display the banner. Standing close to the Shildon Works site, its own history is entirely synonymous with the legacy of the works.” There is a further connection in that the NUR was formed in 1913, just less than two months after the current Shildon Railway Institute building was opened, replacing an older building nearby. 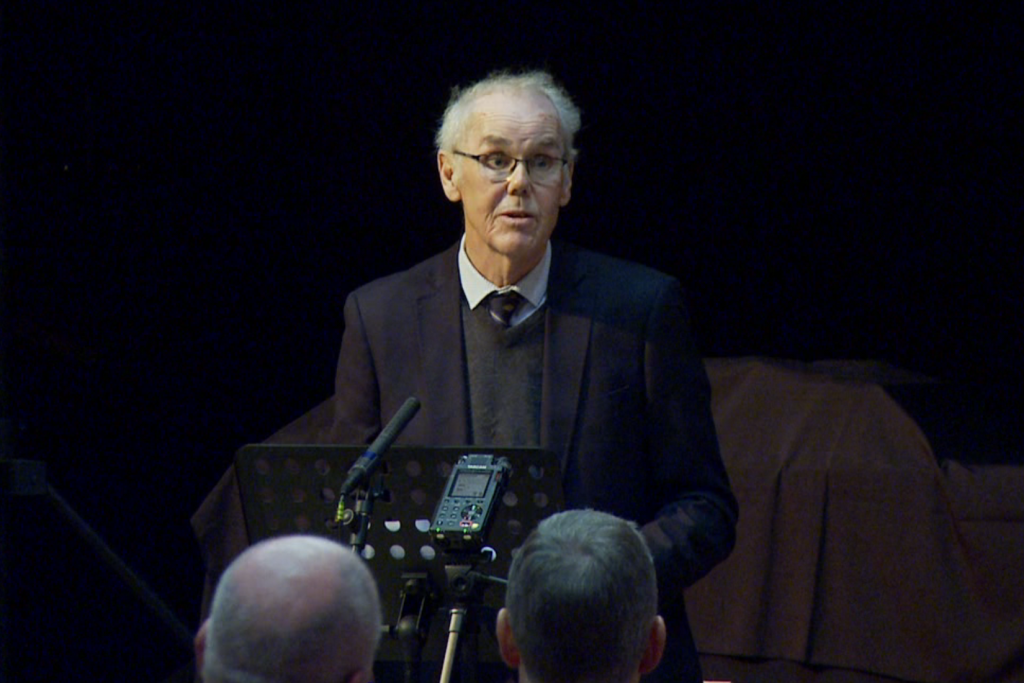 The banner was visited briefly on unveiling day by some younger relatives as an act of tribute. The Newcastle Rail and Catering Branch, and the Newcastle and Gateshead Branch, of the RMT brought along their current banners which depict hand-painted scenes of iconic bridges and rail architecture and engineering on Tyneside. The 1970s Shildon Works No.2 branch banner was also present and on display – and it is hoped that this too might be put on permanent display at the Institute in future.

Folk musician, Sam Slatcher was also present to perform at the unveiling, offering a solo rendition of songs composed by and for the community of Shildon in one of his projects run in the town. The song “Shildon Town” reflects the famous friendly and welcoming nature of the town’s people and recognises how despite the removal of rail engineering from the town it is still very much connected to the world by the passenger railways that originated here. “Wonderful Giants of Old,” by contrast is a lovely graphic storytelling of the opening day of the first five miles of the Stockton & Darlington Railway telling how everything made its way on that leg of its first journey, culminating at Shildon, before being attached to Stephenson’s ‘Travelling Engine”, later Locomotion No.1, to head off to the coastal coal port. Finally, “The Light at the End of the Shildon Tunnel,” penned by the SHA CIC’s Dave Reynolds, is a soulful song of optimism in waltz time that speaks of the opportunities and ‘good times’ yet to come for the town. 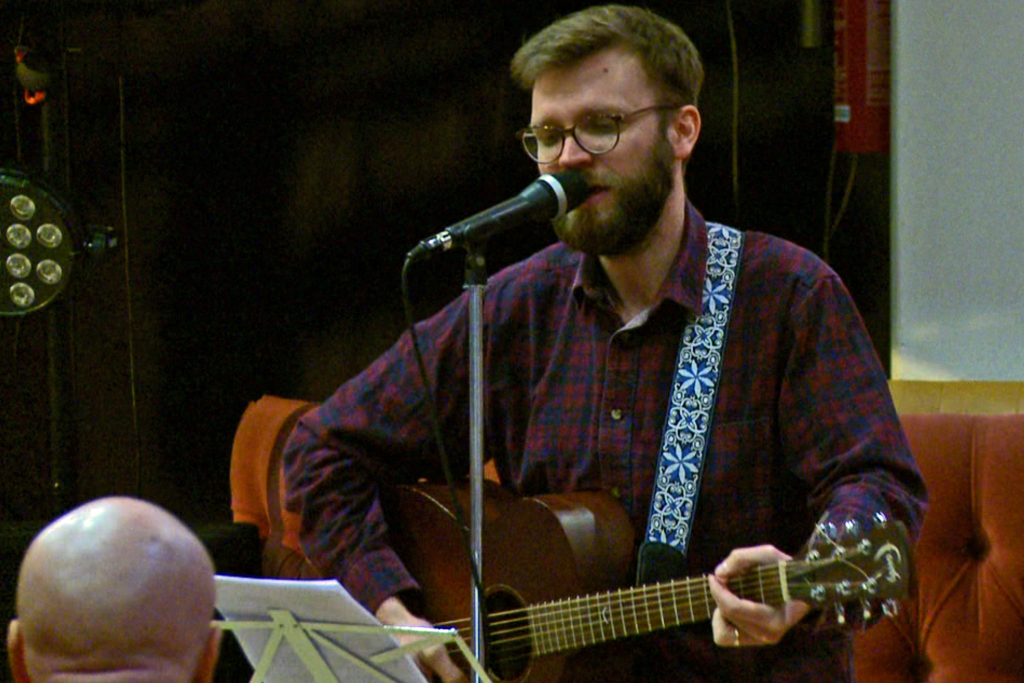 Sam Slatcher (above), of Citizen Songwriters, entertained those present with wonderful songs of Shildon

The organisers of the unveiling were delighted that Michael Lynch, was present to speak at the event, particularly as a donation from the RMT boosted Gerald’s appeal to fund the banner repair. The Union branches also supported the Institute in an appeal at the end of 2020. On this Gerald said, “We remain ever grateful to the RMT for kick starting the appeal. Also to the local people and enterprises that contributed to the appeal, and the unstinting support of Shildon Football Club, the Town Crier and Mike Amos.”

Mr Lynch, during his speech, which included much well researched factual detail regarding the development of the town’s trade union branches, also presented the Institute with two fine gifts. The first is a banner bearer’s sash, generally work by members of the team carrying the banner and supporting ropes at a demonstration, from the era before the founding of the National Union of Railwaymen, which bears the initials of the forerunning Amalgamated Society of Railway Servants who were absorbed by the NUR when that union was founded. The second item is a framed NUR Centenary Certificate dedicated to the Shildon Works No.2 Branch. Both items will be put on public display at the Institute in the coming months. 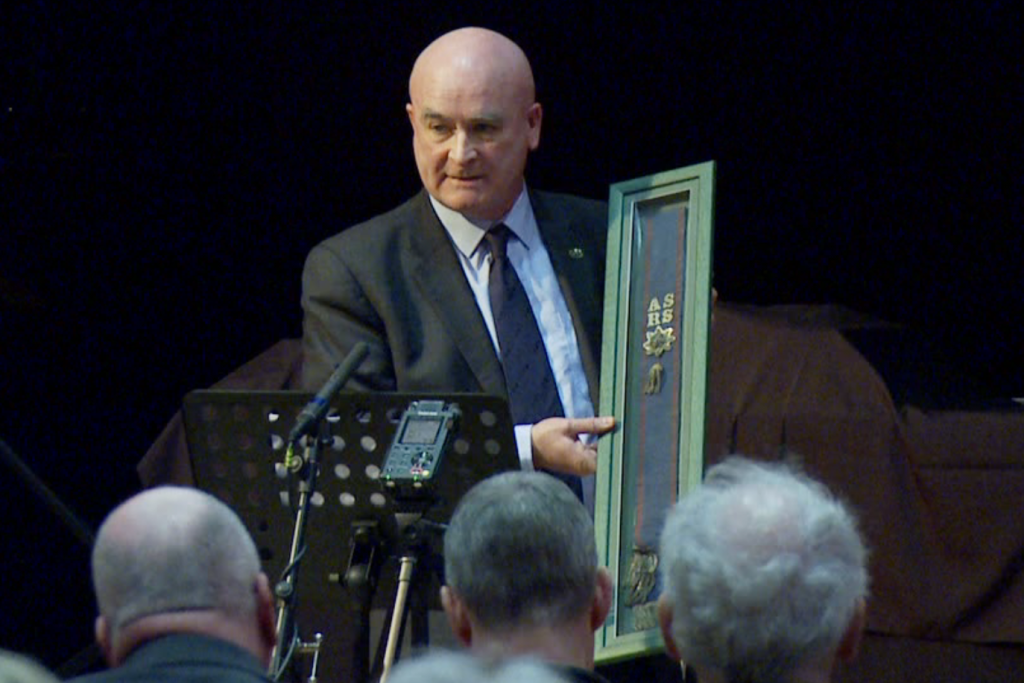 Mr Michael Lynch, General Secretary of the RMT Union presents the Institute with a framed banner carrier’s sash from the Amalgamated Society of Railway Servants, a forerunner of the National Union of Railwaymen

Institute Secretary, Shaun Thompson expressed on behalf of the Institute, particular appreciation to Mr Jenkin for his part in creating the case to enable the banner’s return, as well as fellow Committee member, Adam Thompson for assisting Mr Jenkin. Other statements of appreciation were also shared.

The banner was unveiled at around 1:30pm in the tightly packed entrance hall of the Institute, with the cover, having been made by SOS Volunteer, Samatha Townsend, being removed on cue by Mr Lynch and Anth Knight of the SHA who also assisted in the fitting and cosmetic completion of the case. The sight of the revealed historic banner was met with applause and expressions of enjoyment. 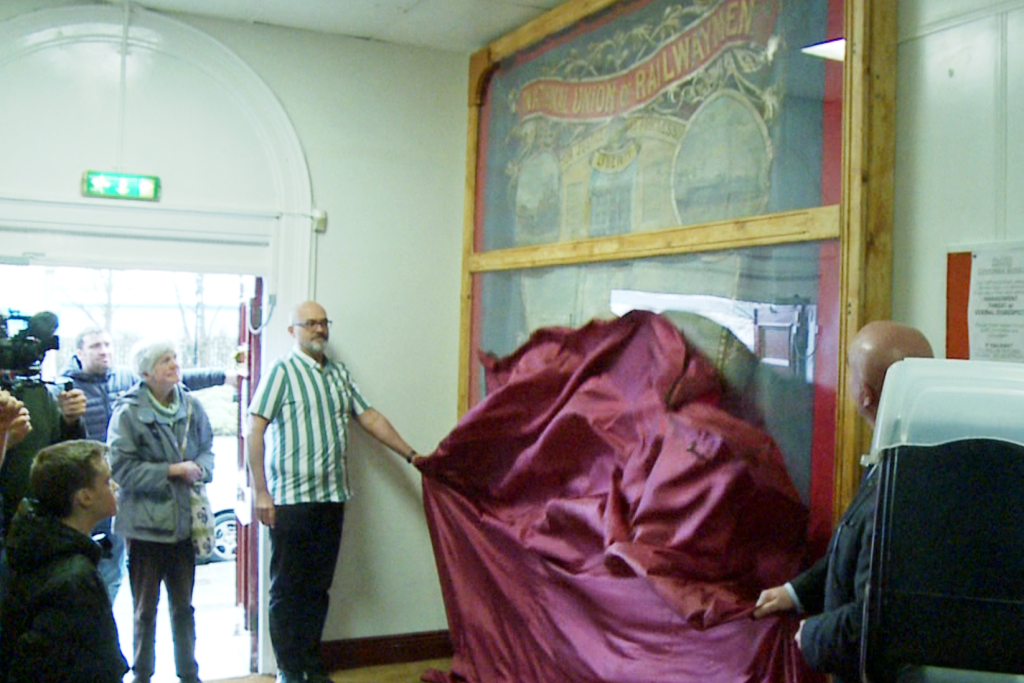 Overall the event was a lovely afternoon, made even better through the efforts of SHA/SOS volunteers who provided free refreshments which included soft drinks, tea, coffee and a buffet of delicious sweet and savoury foodstuff. We hope the occasion is one that will live long in the memory of those who attended and that the next step in our reconnecting the Institute with its distinguished heritage will not be too far in coming in the future. 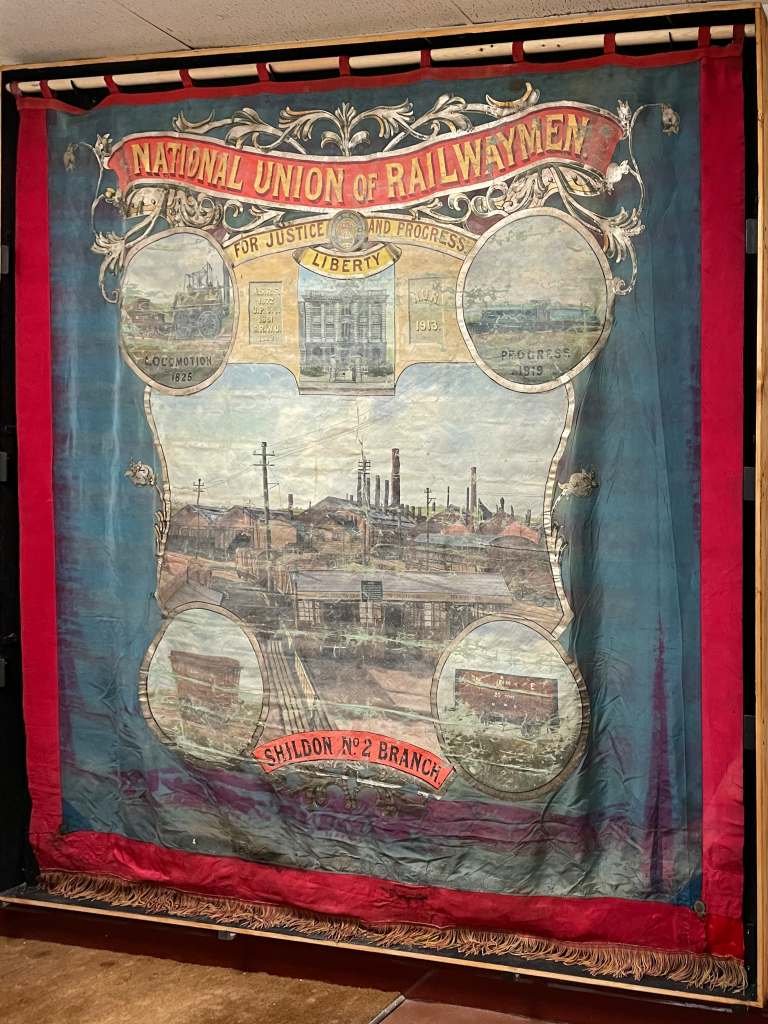 Above – the 1919 NUR Shildon Works No. 2 Branch banner in its repaired state prior to the cover being placed upon its protective casing