As part of our wider initiative to surface and expose the heritage value of Shildon Railway Institute, the first and therefore longest running such organisation associated with the railways, the Shildon Heritage Alliance CIC have produced and published a digital image of the Institute’s Half-Yearly report book via the www.shildonrailway.institute website.

The report book was used to capture a six-monthly address to the members of the Institute on behalf of the serving committee, and each report reflects the progress and challenges of the Institute as well as its financial ongoing standing as an act of transparency to the members whose contributions part financed it. Running to 270 pages, the document covers the period from 1855, where the Institute inhabited a reading room that was part of the Masons Arms building, through to 1892. Details in the book cover the creation of the first New Shildon Mechanics Institute building in 1860, early structural problems with it during the 1860s, and its eventual expansion in the mid 1880s to incorporate the adjacent house (which still stands on Station Street today).

It offers truly interesting insight into the parallel evolutions of New Shildon as a town, community and the Institute itself.

The original book, currently in the hands of a private owner, unable to be scanned flat, was photographed page by page, with permission, and with each page then painstakingly being reformatted and reassembled to create a digital book. The whole process took over 45 hours to complete over a number of months when time allowed by SHA.CIC volunteer and Director Dave Reynolds.

The resulting digital image can be accessed without charge at the following web page: https://shildonrailway.institute/heritage-1/half-yearly-report-book-1855-92

It should be noted that the digital file is really large at around 399MB so caution should be exercised when accessing it – you might not want to view it using a mobile device not connected to wi-fi as the data charges or consumption might prove something of a shock.

We’re hoping that the document will prove a useful reference to individuals and organisations looking to understand not just the history of the organisation and the town, but general attitudes to working class education and reading in that era or regional economic conditions.

The imaging isn’t perfect – you may spot the occasional thumb tip here and there – but by making this unique historical record available we hope that we have helped to share something more of the story that this historic organisation played in the growth of New Shildon and the opportunities it gave to our working class forebears. 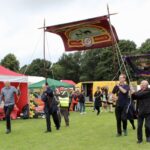 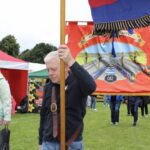 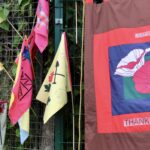 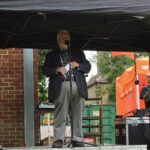 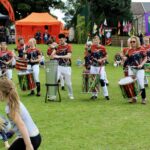 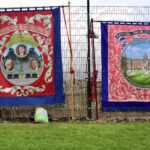 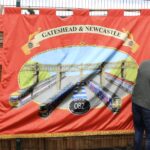 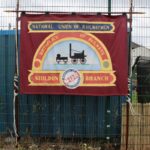 The Shildon Works union banner – the works closed in 1984, but is still part of our town’s DNA and story 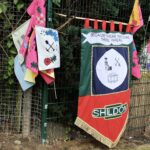 The message on the Institute Women’s banner reads “Because there was coal, there was steam” binding together our coal and rail past 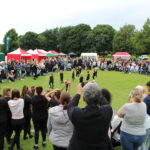 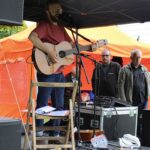 Sam Slatcher of Citizen Songwriters showcased songs that had been written in collaboration with Shildon people as part of his projects. 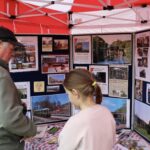 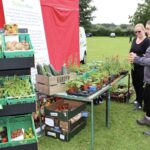 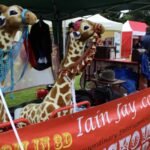 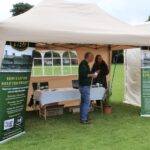 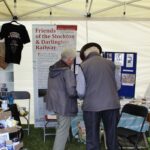 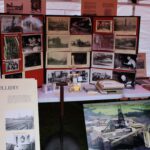 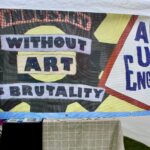 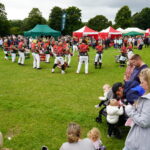 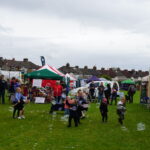 Saturday, 7 August, under the auspices of the Shildon Heritage Alliance CIC, Shildon’s Hackworth Park hosted the Little Big Meeting, a day to celebrate the industrial history and achievements of the people of County Durham and, particularly those in Shildon. It was held because the Durham Miners Gala (or the Big Meeting), which takes place in Durham on the second Saturday of July, had to be cancelled due to coronavirus. A terrible weather forecast at the beginning of the week suggested that the event may not go ahead. However, organisers and entertainers held their nerve and put on a show.

The Marras, the friends of the Durham Miners Gala, issued an invitation to communities across the north-east to host their own mini-galas, offering small grants to help enable this. The SHA CIC, whose members and volunteers also overlap with other local heritage organisations including the Eldon Drift Miners Banner Group and Brusselton Incline Group answered the call, submitting an application for a grant, as well as an additional grant application to the Bishop Auckland and Shildon Area Action Partnership to provide a small budget for entertainment to engage younger visitors.

The day began with a blustery banner march to traditional Gala Day march music played by the Durham Miners Association Brass Band. Local men and women paraded the banners of Eldon Drift Colliery and the 1970s banner created by the Shildon Branch of the National Union of Railwaymen. The newest banner in the parade was that of the Women’s Banner Group celebrating the role of women through the ages that have provided strong and essential support in the mining communities of the north. The beautiful banner was made possible by the determination of a group of women volunteers, and organisers of the Little Big Meeting were proud that it should have its first public parade at their event.

As those who have been to the Big Meeting will know, a key traditional part of the Durham Miners Gala since the 1870s are the speeches by trade unionists, activists and politicians. This was also the true of the Little Big Meeting. Speeches were given by Samantha Townsend (Shildon town councillor, County Councillor and Chair of Bishop Auckland Constituency Labour Party), Yvette Williams MBE (Justice for Grenfell Tower), Jane Hackworth-Young (Vice Chair, Friends of the Stockton and Darlington Railway, and great-great-grand-daughter of Timothy Hackworth), Tosh MacDonald (ASLEF trade union) and Alan Mardghum (Durham Miners’ Association).

Following her own speech, Durham County Councillor Samantha Townsend, a SHA CIC volunteer who was also part of the organising committee, spoke of her pride. She said, “It really moved me to see Hackworth Park used to celebrate our history, culture, heritage and community.
“The banner parade was very emotional, just as it can be in the Durham Gala, and I hope that some people who got involved or took photos will consider travelling up to Durham for the next Big Meeting.
“It was an honour to welcome friends and visitors to Shildon, some of whom had travelled from as far afield as Seaham and Hull to celebrate Shildon’s unique place in history”.

The event was not just about history and politics. Those who braved the changeable weather were enjoyed hours of entertainment and the rain did not dampen the spirits. Organisers wanted to create an event that had something for all the family, and they were happy to see people of all ages enjoying the different acts that performed. Runaway Samba got the crowds swaying before the Infinity Dance performers showed everyone how to dance properly. Sam Slatcher of Citizen Songwriters performed his original songs, including ones inspired by Shildon and Durham city. Throughout the day Ian the Entertainer worked tirelessly to wow the crowds.

Dave Anderson, Chair of Marras – Friends of the Durham Miners’ Gala, was part of the organising committee who brought the event to Shildon. He reflected, “It was almost as important to do the event as it was that it was a success. I think the wide variety of speakers, performers and exhibitions made up a great event at a time when we are just beginning to move out of the pandemic. It was very much in the spirit of the Big Meeting and a steppingstone to next year’s return in Durham”.

Shildon Heritage Alliance CIC Director Dave Reynolds, lead organiser of the event, gave thanks to all those involved, saying “Special thanks to those that worked tirelessly throughout the day to entertain, engage and inspire our younger visitors.
“The phrase ‘the past we inherit – the future we build’ is most pertinent here. These young people are our future, and to connect them to their roots whilst they played and danced and enjoyed themselves was one of our big hopes for the day and you ensured that we had something for everyone”

Organisation for the Little Big Meeting was a collaboration that also involved the Eldon Drift Miners Banner Group and the Marras – Friends of the Durham Miners’ Gala. The event was made possible by support Shildon Town Council and funding from Marras, the Durham Mining Museum, ASLEF and AAP funding from county councillors Samantha Townsend, Matthew Johnson and Shirley Quinn. Organisers also paid special thanks to Shildon Town Council staff, whose hard work and dedication on the day and during preparations made the event possible.

We also also asked those who enjoyed Saturday’s Little Big Meeting to support The Big Meeting. To find out more or to sign up to Marras – Friends of Durham Miners Gala, visit https://www.friendsofdurhamminersgala.org/marras.